George Becker opened Becker Funeral Home on Park Street in Sharon Springs around 1906.  The funeral home was previously a wood shop owned by the Becker family for approximately forty years (1866-1906).   Soon, Leon Lappeus (1882-1961) became a partner in the funeral home and eventually sole owner around 1910, when the name was changed to Lappeus Funeral Home.  Eventually, Leon’s son, Harold Lappeus (1925-1998), operated the funeral home until retiring and selling the business in 1996 to current owner George VanGarderen.
George is a 1994 graduate of the Mortuary Science program at Hudson Valley Community College.  While attending Hudson Valley CC, he worked at the former Frederick Funeral Home in Albany.  He completed his residency at Regan and Denny Funeral Service in Queensbury.  George lives in Sharon Springs with his wife and Middleburgh native, Maggie Bouck.
Harold E. Lappeus (1925-1998)
In the photo above, circa 1906, a pair of white horses dressed in black mourning blankets with large tassels stand ready to pull a hearse.  The hearse is a turn of the century carriage made of primarily wood and glass and possibly accented in either gold or silver.  George Becker is on the left and Leon Lappeus is on the right in the photo.

Harold Lappeus at the Harness track in 1962 (below) 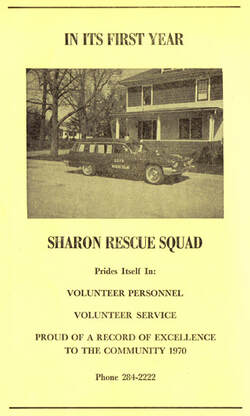 This advertisement (left) for the Sharon Rescue Squad, circa 1970, features their first Mercury ambulance, which was donated by Harold Lappeus after he closed his ambulance service due to rising insurance costs and the trend for municipalities to handle this function.
﻿